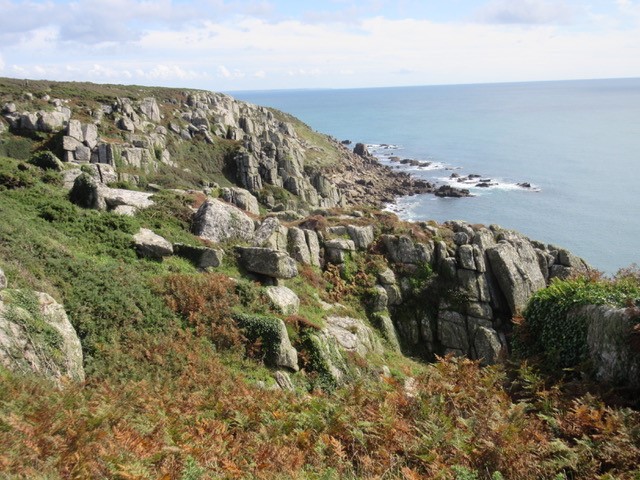 On 13 October 2020, I finished walking the South West Coast Path (SWCP), a journey of 630 miles that I’d started on 4 May 2016. The SWCP is the longest and finest of Britain’s National Trails, starting at Minehead in Somerset, going along the north coast of Somerset, Devon and Cornwall, around Lands End and along the south coast of Cornwall, Devon and Dorset, finishing at Poole. It took me 67 walking days, which averaged out at 9.4 miles per day. Not long distances, but quite enough for that sort of terrain where you are continually going up and down. They say the Path is the equivalent of climbing Mount Everest four times over!  It was a most amazing adventure.

Why do it? For the same reason that I give to people when they ask me why I do tai chi. I feel good when I do tai chi. I feel good when I walk, and especially good when I walk up and down hills! Having said that, it wasn’t the easiest of projects to take on. Initially I’d cleared two months to do as much of it as I could in one go, but after 2½ weeks my right foot gave out because of the intensity of the terrain with the steep ups and downs. I had to pause and continue the following year. Actually, that was a relief because it was so fabulous and stunning that it felt too much to do in one go, and I needed to chunk it down.

So, why am I writing this? Because my tai chi practice and principles helped me in various ways.

After about four days, my left knee started hurting after a particularly tricky up-and-down section (an old injury which every now and again makes itself felt). This also happens at summer or winter tai chi trainings when doing sensing hands intensively, and it tells me that I am not keeping my foot flat with the weight spreading evenly over it, thus giving stability to the knee. The solution is to be aware of laying my foot down from the centre of the heel along the midline, no rolling to the outside or inside, so equal weight falls into the pads of the big toe and little toe. Pain is a good reminder that I am not doing that, and as soon as I do lay the foot down along the midline, the pain disappears. So, from then on I placed my foot with care, and my knee was fine until I forgot and had to be reminded again.

I restarted in May 2017, but within five minutes of setting off on the third day, I sprained my left ankle. It was totally my fault, as I had been careless and not taken an empty step through thick grass and thus had not appreciated what was under my foot. Empty steps—a fundamental tai chi principle! Since my foot was well supported in its boot, I was able to continue for the rest of that day’s planned walk. As long as I laid the foot down along the midline, it didn’t hurt. Midline again!

That put paid to that chunk, though I was able to set off again in September. From then on my pattern was five to seven days of walking in May, September, and October, and no further foot injuries. My final five-day chunk slotted in between some fierce Atlantic storms and a further COVID lockdown.

I found the tai chi teachings of how to walk up and down stairs in principle (taught in Fording the Stream from The Eight Ways of Tai Chi Chuan) invaluable when going up and downhill. Going up by not pushing off from my back foot and with my front foot well rooted into the ground; going down with the thousand pound weight on my tail bone being really sunk low; making empty steps giving me stability and security. So much safer than if I had been in my head making me top heavy! When I was younger, I used to be nervous about going downhill and slipping, but not any longer. I felt secure on my feet and noticed to my satisfaction that I was often considerably speedier than other walkers.

I should not fail to mention the most important principle of all, being in the dantian. You really have to be centred in your dantian, totally awake and grounded, while walking along some of those very narrow paths with sheer drops down to the rocks and sea below, keeping your balance in a howling gale (actually very few of those—I think I had strong wind and rain on only four or five days). But even if I were not battling the elements, the qualitative difference of my experience was striking. When I was in my head, not connected properly to my body as an integrated whole, accidents/falls/tripping could and did happen, and I didn’t take in as much of what was around me. I took in so much more when I was awake, aware and relaxed in my dantian, really able to embrace and absorb the stunning surroundings. The quality of my experience was far, far richer.

I am truly grateful for what tai chi has given me.